What to do with Pangrati Woods? In the center of one of Athen’s most densely populated neighborhoods is the little oasis of Pangrati Woods.

Inside the Woods it’s easy to forget the choking traffic that has come to typify modern Athens. In a city with only 2 square meters of green space per resident the winding pathways, picturesque stone steps and tall trees take the visitor away, even if momentarily, from the stress of city life.

The City of Athens has proposed a revitalization plan for the inner city green space that has spawned strong opinions both for and against the project.

While Athens Mayor Nikitas Kaklamanis believes in the plan to uprade the parks lighting and open a cafe and an outdoor theater, others aren’t too pleased with the idea, arguing that a cafe and a cinema would only add more concrete to Athens. Professor Eleni Portaliou believes that the…

…parks and woods are natural oases, small ecosystems within the city and should not be burdened with facilities that attract large crowds.
(Athens Plus, November 14, 2008)

It is true that in 1928 the park was host to both an open-air theater and a small zoo. 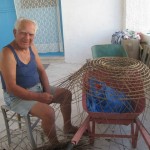