An ancient mystique is one ingredient luring me to a foreign land. The island of Lesvos proved bewitchingly alluring, not least because it is home to the oldest known female poet in history, Sappho, born in 628 BC in the town of Erassos. A second beckoning ingredient is a land’s potential for adventure travel, and Lesvos delivers on this count.

Also known as Mytilini, Greece’s third largest island has a network of at least 400 miles of well-maintained paved roads. With my Trek 1220, two panniers and a tent, I spent two weeks bicycling to just about every town and village in the island accessible by asphalt. With great relief, I hereby broadcast that as a single female traveler, I was never once harassed, disturbed, or pestered by any man.

Although Mytilini with roughly 90,000 inhabitants certainly has its share of foreign visitors, compared to Cyclades islands such as Santorini and Mykonos, its tourism falls short of industry proportions. There are pockets of tourist activity where mostly northern Europeans cluster, yet more common are the countless empty beaches that render bikinis cumbersome. I slept on many such beaches, my tent pitched within spitting distance of the Mediterranean. The twelve-hour overnight ferry from Athens deposited me in the capital, Mytilini, at 8:00 in the morning.  Upon touching terra firma, I set off cycling up the island’s eastern flank taking a leisurely pace to check out several monasteries or marvel at the tantalizing views of Turkey, a mere two hour boat ride away.  The silence of a lone highway was often startlingly ruptured by a clamorous clink-clank-clink of metal bells dangling from a herd of twenty or so goats.  The click-clack of old men riding donkeys side saddle is also a frequent sight for a road cyclist.

By 6 p.m. my first day, 40 miles later, I arrived to the adorable fishing village of Skala Sikaminias where I camped for the night.  Its parent town, Sikaminias, is two steep miles away, comprising maybe 900 inhabitants.   When summer comes many of the villagers of Sikaminias move down to Skala Sikaminias, and when summer ends, they ascend back up the mountain. I was told about this unique seasonal movement by a resident of Eressos and Skala Eressos.  She said that until only four years ago for decades her entire village — including merchants, doctor, pharmacy, post office — made its annual mountain-sea-mountain relocation en masse on the very same day.

From Skala Sikaminias, I traveled about ten miles westward on a gravel road hugging the sea to photogenic Molyvos, (population about 1400), a town which under no circumstances can be missed.  Its winding, narrow cobblestoned streets and elegant stone houses with loudly painted shutters set against the blinding blue sea and an imposing castle make Molyvos a destination for the romantically inclined. On that rocky coastal road to Molyvos I came across hot springs that are not “tamed” so to speak, meaning no one has enclosed them. They are just out there in the sea, no building, no sign, no fees, no people. You wouldn’t even know to look for them except that I got a “heads-up” from a local dispensing sketchy, but correct instructions – look for steam arising out of the sea near a white boat and a big rock not far around the bend. I sat in bliss in hot water rising from the earth, my back resting against a smooth rock, savoring the tingling feeling of cool sea waves lapping over me.

About three kilometers from Molyvos is a more formal hot springs called Eftalou. The antiquated spa is a little structure with a round white roof, a hammam as it is called in Turkish, that is a popular tourist site famed for its natural healing capacities. The place was closed on a Sunday morning, but I went behind the building and sat directly in the hot sea water

I visited many mountain villages of 200 or 300 residents, places like Pterounda or Ambelika or Pelopi whose Dukakis Street is named for a certain American because this is his ancestral home. These are towns by and large ignored by European vacationers since the beach is their premier attraction. Each village has a little plateia (square), usually with a vine-covered canopy for cherished shade. Mandatory are several coffeehouses, called kafeneions, where the men sit for hours drinking thick Greek coffee from doll-sized white demitasse cups, “Mavro,” they’d order (black).

I would bicycle into a village, often turning a narrow corner, suddenly appearing into the plateia rather dramatically from nowhere in stark contrast to the noisy announcement of a car or motorcycle. I was invariably told that I was the only bicyclist in memory to ride into town. My presence always created a hubbub and soon the routine litany of questions would begin in this order: Where are you from? Where is your husband? Do you have any children? After a while, I would leave the center of gravity of the town, the plateia where the men dominated, and start venturing down the village’s side streets where the women prevailed. I would find them at home, sewing, cooking, relaxing on porches, or tending to animals. Young and old, seemed dazzled by my female presence on a bike. “All alone?” the women always asked in seeming admiration. A glass of water, fruit, a towel to wipe my sweat were offered to me when I visited women in their homes. I was never looked at suspiciously or with a glare of distrust. A smile always greeted my smile, coupled by direct and forthright eye contact.

The shape of Lesvos can be likened to an upside-down uterus with the Kalloni Gulf marking the dividing line between the verdant, watery east and the dry, arid west. Helpful to a cyclist, even in the barren west, is the ubiquity of potable water. Every town has at least one public fountain, and often you find running water in the middle of absolutely nowhere and refreshingly cold. While cycling in a pulverizing sun which Greeks have sense enough to stay out of, I’d dunk my head under the spigot and the rush it created was enough to keep me cycling until the next fountain. This island has many novel surprises, such as, the petrified forest near the western town of Sigri whose “trees” still stand (in contrast to Arizona’s rock-forest all lying on the ground). Migrating birds from Africa make the island an internationally desired venue for birdwatchers. The aromatic pine forest mountains in the south can make a mountain biker delirious, while Kelloni Gulf, looking and feeling like a big lake, offers great windsurfing and is famous for its sardines.

Equally noteworthy is Lesvos’ flora. Near Molyvos I unexpectedly set my tent next to a bush of wild rosemary and I’m certain its heady fragrance infiltrated my dreams for the two nights I camped there. One day on an isolated road I encountered a smiling man (where had he come from?) carrying a little green and lavender sprig. He handed it to me saying, “mentha,” which my dictionary translates as peppermint. I carried the wild twig in my handlebar bag for days, whiffing its energizing scent regularly. In an adorable fishing village, Niferida, an old woman cooked louloudia. This uniquely delicious plate consists of the bright yellow/orange flower of the zucchini plant rolled up in a conical shape and stuffed with rice and herbs. I’d never seen or tasted anything like it. Skala Eressos is the epicenter of lesbian visitors from all over the world, many of whom come year after year. Although unmistakably Greek, the town has its own distinct vibe. You find, for example, women casually caressing each other at the hip Sappho Hotel, a nude beach unusually close to the town’s main beach, a taverna named Filomena which serves a daily vegan dish, reflexologists and other healers advertising their arts, a women’s only hotel, anti-war graffiti stating, “Bush, Blair, Sharon = Terrorist.”

If you like ouzo, then head to Lesvos and specifically to the town of Plomari in the south where it was born. There are actually certain brands of ouzo that can only be purchased in Plomari. Just as wineries are to be found in Santorini, ouzo factories invite you in to taste their brand. Visitors to Lesvos regard this precious island as one of Greece’s best kept secrets. The people are warm and friendly. The food is divinely delicious in part because Mytilini produces some of Greece’s finest olive oil. There are as yet no high rise hotels or packaged jumbo jets of tacky tourists trampling all over the place. I didn’t meet a single American until I took a day-boat to Turkey at the end of my trip.

For you women adventure travelers on the look-out for a female friendly, mountain-sea locale that offers physical challenges and an unobtrusive charm, Lesvos is waiting to unleash your goddess spirit. 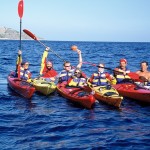 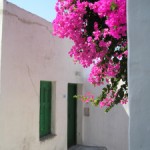