Skyros has its own distinct culture that is very ancient, such as the Skyros Carnival where young men don goat masks, hairy jackets and go around town clanking goat bells. Their partner (also a man) is dressed as a bride, also with a goat mask. This cultural peculiarity is said to derive from Achilles who hid out in Skyros dressed as a girl to escape the oracle’s prophesy that he would die in battle in Troy. Achilles was the principal deity worshipped on Skyros. I saw photographs of the Carnival with the goat get-up and it struck me as exotically pagan.

Skyros (pop. 3000) is located in the Sporades (“scattered” like spores), a cluster of islands east of the central Greek mainland. It is difficult to get to this island because boats do not leave from primary ports, such as, Piraeus or Thessaloniki. You must first go to neighboring Evia island, and then catch one of the two daily two-hour boats to Skyros. There are two flights a week from Athens, invariably always booked.

The Skyrians do not seem to welcome foreigners. Tourism is hardly promoted, access to the island remains challenging, signage is primarily in Greek script, and hotels are only found outside the parameters of the island’s capital, also known as Skyros. There are only two main settlements on the island, Skyros and Linaria where the port is located. Skyros seems like a cousin of the Cyclades, identifiable by blinding whitewashed flat-roofed buildings and blue, blue everywhere. From a distance the white town of Skyros looks to be huddling against or spilling down the side of the brown mountain known as Frouria. Skyros has the same labyrinthine streets as other Cyclades islands, such as Naxos’ medieval Chora. It is confusing finding yourself in the same place you started and wondering how you made that little circle when it seemed you were walking in a straight path.

The town’s sloped streets are inlaid with large squares of colored granite which are probably slippery when wet. Yet, except for last winter, an old man told me that it hadn’t rained on the island in ten years. The most precious feature of Skyros town is its total absence of motor vehicles. Every community should be blessed with such quiet tranquility.

Many alleys and side streets are trellised with intoxicating jasmine which contribute to the town’s mesmerizing effect. I would thrust one of the delicate flowers in my hair and wear it for hours until it wilted like a faint Victorian woman, and still the tiny petals emitted an abiding scent. Basil and marjoram plants nestled outside Skyrian homes also infiltrate the aroma-scape. In August fresh figs are picked directly from the trees and you can stand gorging yourself unrestrained. The succulence is akin to dipping your finger into a jar of jam.

In a jazz hangout known as Calypso, Roy, a British scientist with a long white ponytail, can be found. He has been coming to Skyros every summer for 13 years staying with his French companion, Martine, who’s been coming every 20 years. They claim that Albert Camus once slept in the house they currently rent, owned by a cultured French woman. According to Roy, Skyros has been a low-key retreat for French intellectuals and artists for years.

Skyros is the type of place that alternatives gravitate to. Skyros Institute was founded almost 25 years ago by an American and a Greek. It has programs featuring yoga, reflexology, travel writing, Greek cooking, all sorts of classes like that.

For isolation, take a journey down the craggy, arid, inhospitable southern coast as it is virtually unpopulated. I am a rugged trekker entranced by rugged splendor. On this day, my partner and I didn’t encounter a single person – only wild goats and the famed, but rarely seen, wild Skyrian pony, a miniature breed unique to the island. Not even one boat passed by the southeast coast during our four hour hike. By contrast the north of the island is green and full of therapeutic smelling pine trees. Traversing its unpaved mountain road felt like one big aromatherapy session. Skyros has no famous antiquities to lure tourists. In 1979, ancient ruins were discovered from 2500 B.C. and are currently being excavated. Palamari is a relatively small site but it is being vigorously excavated by a team of Greek archaeologists. The site sits on a promontory overlooking the sea and it certainly felt strategic just standing there and easy to imagine how the ancients felt looking out into the Aegean with a horizon that defines infinity. 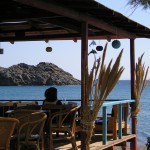